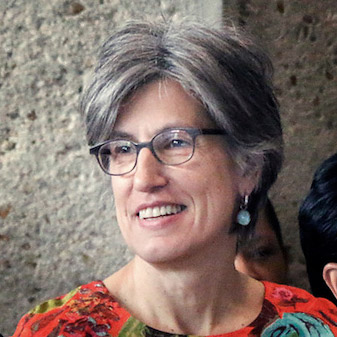 Flavia Schlegel took up her duties as Assistant Director-General (ADG) for the Natural Sciences on 1 October 2014.

She is the holder of a Medical Doctorate obtained in May 1992 from the University of Zurich in Switzerland and a Master’s Degree in Organizational Development obtained in July 2001 from the Institute for Interdisciplinary Research and Continuing Education of the Universities of Klagenfurt and Vienna (Austria).

Flavia Schlegel joined the Swiss Federal Office of Public Health (Bern) in September 1997, as Director of the AIDS Section, responsible for the design, planning and coordination of the national HIV/AIDS policy and prevention measures. She then became Director of the Health Policy, Research and Education Division responsible for designing the Health Research Concept on Education, Research and Technology. In August 2002, Ms Schlegel spent two years with the Swiss State Secretariat for Education and Research serving as Science Counselor for the United States and Canada with the Embassy of Switzerland in Washington D.C., analyzing and reporting on North American Science and Innovation Policies.

Ms Schlegel returned in October 2004 to the Swiss Federal Office of Public Health (Bern) taking up the position of Vice-Director, Head of the Public Health Directorate and Member of the Executive Board until September 2008 when she was appointed Director of Swissnex China and Vice-Consul General based in Shanghai (China).

During her four-year period in Shanghai, Ms Schlegel was responsible for overseeing the establishment of Swissnex in China; a transdisciplinary institute for Science, Technology, Innovation and Culture.

Since October 2013, Flavia Schlegel worked as an independent consultant for Public Management dealing with international cooperation, strategy and project development and change and diversity management.

IV. A The Journey of Refugee Scientists