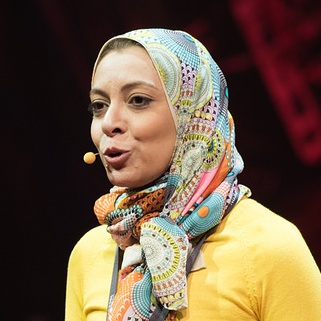 Dr. Gihan Kamel is the Infrared Beamline Scientist at SESAME (Synchrotron-light for Experimental Science and Applications in the Middle East), on leave from the Physics Department, Faculty of Science at Helwan University in Egypt, where she is also a lecturer of Physics.

She obtained her Ph.D. degree in 2011 from the University of Rome, La Sapienza, Italy. She has also got a beamline researcher position (June2014-July2015) at DAΦNE-light, INFN-LNF, Italy. She is a member of the Egyptian Society of Crystallography and Its Applications, ESCA.

She is also a member in the National Committee of Crystallography of Egypt, ENCC, and she is the co-coordinator of Eg-SUN, the Egyptian Synchrotron Users’ Network.

She collaborates in various national and international research projects utilizing advanced and complementary approaches in Life and Materials Sciences. She is also focusing on developing the state of the scientific research among under- and postgraduate students through her membership in the Technology Transfer Office Advisory Board, TTO.

She represented Egypt in SESAME Users’ Committee during the period 2012-2015.

Her activities include organizing various scientific events to raise the concern on different topics linking science to society and industry, in addition to facilitating the awareness on the issue of women in science by mentoring and supporting young female students to achieve an advanced scientific career.

Abstract:
SESAME (Synchrotron-light for Experimental Science and Applications in the Middle East) is the… (more)

SESAME (Synchrotron-light for Experimental Science and Applications in the Middle East) is the first and the only synchrotron light facility in the Middle East. It aims at promoting advanced research capabilities and technology within its Members, and is considered as the region’s bridge to peace and mutual understanding.  The current Members of the facility are Cyprus, Egypt, Iran, Israel, Jordan, Pakistan, the Palestinian Authority and Turkey. Whereas, Canada, Brazil, China, the European Union, France, Germany, Greece, Italy, Japan, Kuwait, Portugal, the Russian Federation, Spain, Sweden, Switzerland, the United Kingdom and the United States are the Observers. It is so true that this third generation light source seeks to establish Excellency of science in the region, as well as, bridging so many gaps between its diverse -culturally and politically- conflicting societies. However, there are other opportunities those were witnessed along the way. Difficulties are expected still, and more challenges are there, but with its ongoing progress, the dream of so many people in the region and beyond is becoming a reality. Being a role model in the region, SESAME goals, milestones and challenges will be highlighted.