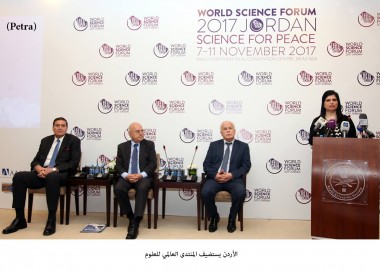 orum met today to discuss planning and progress for the biggest science event ever to take place in the Middle East. World Science Forum 2017 (WSF 2017) will bring together the world’s leading scientists, political leaders, academics, decision makers and investors to Jordan’s Dead Sea Convention Center from November 7th to 11th. Under the theme of ‘Science for Peace’, representatives from over 100 countries will put science at the forefront of efforts to bring peace to our world and to tackle the factors that threaten our stability and growth.

Jordan beat determined competition from around the region and the world to be chosen to host WSF 2017. The Kingdom was selected by the WSF partners, which include UNESCO and the Hungarian Academy of Sciences, as a location where peaceful dialogue and innovative thinking are nurtured and celebrated.

The 4-day Forum will include key sessions on topics including energy, water, food and the right to an education that unlocks opportunities in the world of today. Delegates will also examine the challenges and opportunities of the digital age, and the role science must play in making our planet resilient and resource aware.

Speaking after the National Task Force meeting, HRH Princess Sumaya bint El Hassan, Chair of WSF 2017 and President of the Royal Scientific Society, which is organising WSF 2017, said the Forum would give Jordan a chance to showcase to the world what a small, open and innovative nation could offer to the region and beyond:

“We want the world to know that we are connected to scientific research and thought processes across the globe, through our triumphant diaspora scientists and through our networked young researchers and engineers here at home.”

The Princess highlighted those aspects of the Forum that would help to strengthen the bonds between Jordan’s scientific community and global science:

“WSF 2017 is helping us to start a movement that will leave a lasting legacy for our nation and our people. Whether by celebrating Jordan’s Stars of Science, our Global Young Scientists, or Women in Science, we are ensuring that our scientific talent is at the table in terms of discussion and engagement at a global level”.

WSF 2017 is being held under the gracious Patronage of HM King Abdullah ibn Al Hussein, and Their Excellencies President Áder of Hungary and Director-General Irina Bokova of UNESCO. The event has the full support of the UN Secretary-General António Guterres and will be attended by several Nobel Laureates and senior government representatives from around the world.

As an esteemed member of the National Task Force, H.E. Dr. Khaled Toukan - Chairman of Jordan Atomic Energy Commission added that celebrating the Jordan Year of Science this year co-joined with the launch of the World Science Forum, offers an opportunity to get better acquainted with the particle accelerator-based facility SESAME (Synchrotron-light for Experimental Science and Applications in the Middle East); the Middle East's first major international research centre.