”Alternative facts are lies” – WSF is not exclusively science policy

“The spread of fake news had already presented a serious danger back in the first decades of the Academy’s existence and this is still true if not more so today,” said Mr. László Lovász in Jordan, during the 8th World Science Forum’s thematic session on science-based advice. Éva Kondorosi, Vice President of the ERC (European Research Council), spoke about disadvantages female researchers may encounter at their workplaces.

According to the organisers, the objective of the World Science Forum (WSF) is to boost self-critical dialogue on the comprehensive application of scientific methods and achievements. It is for exactly this reason that representatives of research institutes, scientific associations, academies, NGOs, young researchers and science journalists were in conference with ministers dealing with science, their advisors and entrepreneurs. In addition to the eight plenary sessions, the conference is made up of 15 thematic and 20 individual sections. 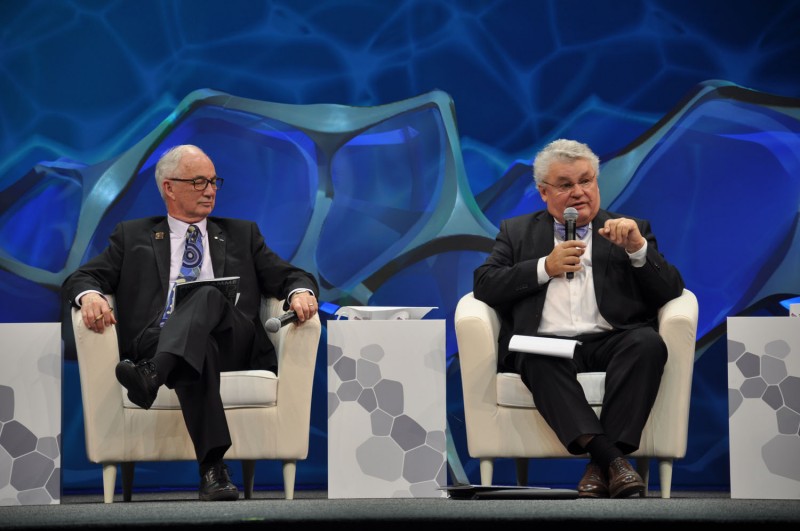 A recurring issue at the World Science Forum is the way scientific results reach politicians and other decision makers. At the 2017 forum, this issue was augmented with the question of “alternative facts.” As William Sutherland, a research biologist of Cambridge University highlighted during the thematic session A Science-based Advice to Policy-Makers in an Era of Alternative Facts,according to a 2014 research, individuals altered their decisions almost half of the time after being fed precise scientific facts. “Evidence may reach decision makers through experts. In most cases, however, experts are not fit for creating concrete action plans. It is the responsibility of political decision makers to choose between available solutions based on their own values and bearing in mind that they are fully aware of all related scientific facts,” Mr. Sutherland added.

“Forwarding knowledge to decision makers is a complicated task,” Thierry Courvoisier, Chairman of EASAC, stated at the event organized by EASAC (European Academies Science Advisory Council) and the Hungarian Academy of Sciences. “It must be based on trust. Representatives of science are responsible for forwarding scientific facts to decision makers in a serviceable form and at the proper time.”

Fake news then and now

“The Hungarian Academy of Sciences has dealt with alternative facts before back in the 19th century,” said Mr. Lovász, on behalf of the co-organizing institution. He mentioned a case from 1865, when the Academy identified a type of mineral water from Rákospalota, with alleged antimony content and presented as a panacea. The Academy at the time called the locals attention to the fact that they should be glad that their water is not toxic, let alone a panacea. Homeopathy first appeared in the Academy’s crosshairs back in 1856 and lo and behold it is still a relevant issue today. “The spread of fake news already presented a serious danger then and this is even more so today,” said Mr. Lovász. In his view, today we are facing the phenomenon of social media easily becoming unfortunate primary channels for pseudoscience, since any topic may find followers who will then only read news sources they approve of. Another problem is that, while scientific publications have their strict rules, the publication of “alternative facts” has no particular boundaries. Scientific bodies have little choice but to become reliable news sources themselves and co-operate with the media, present research methodologies and potential conflicts of interest and promote critical thinking, the president explained.

“An alternative fact is a lie,” said Rolf Dieter Heuer, president of the European Committee scientific advisory board, former director general for CERN. The reason for their spread is that we cannot verify the reliability for the huge amount of data which we encounter on a regular basis. Scientists must also be able to handle communication relating to some uncertainties in regards to some facts, for this is the only way of developing trust towards scientists. He stressed that in its communication, science always has to argue for, and not against things.

Training is required for an advisor’s role

According to Vladimír Šucha, Director-General of the Joint Research Centre of the European Commission (JRC), to say that the communication of facts is the sole responsibility of scientists would not be the right approach: no such advisory model can be successful. Instead of the linear flow of information, trust-based relationships are needed between scientists and political decision makers. “Science-based advice is going through a paradigm shift. We must stop complaining about decision makers not having time to read all the facts. Scientists must own up to their values and defend them, no matter the consequences,” he said.

All the participants agreed that scientific facts should not be presented as the antitheses of emotions, because such debates lead nowhere. Scientists should speak about the consequences of decisions and about their importance too. Furthermore, they emphasized that just like not every scientist is suitable for the popularization of science, science-based advising is not for everyone, either. Success demands training and practice. 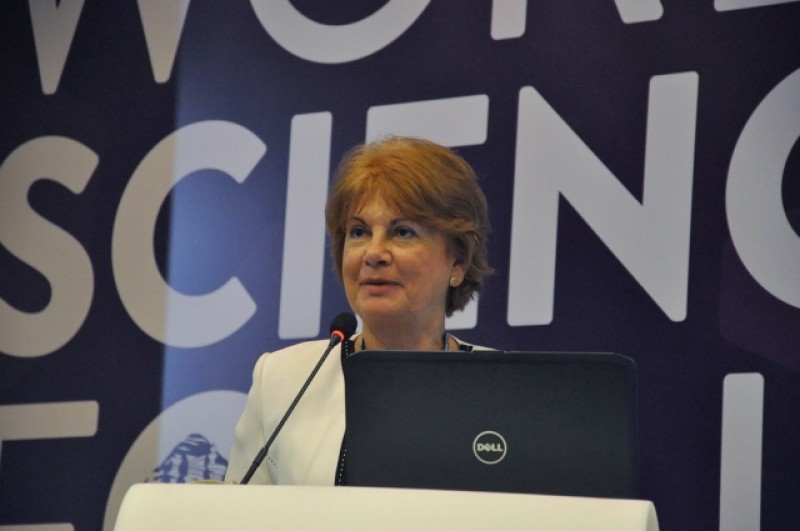 On behalf of the host nation, participants of the WSF’s thematic session Women as Leaders for Diversity and Development were greeted by Noor al-Hussein, widow of King Hussein bin Talal. The moderator was Katalin Bogyay, Permanent Representative of Hungary to the United Nations. As Noor al-Hussein said, a current task for Jordan is to secure that after finishing their studies, as many women should have active employment as possible, especially in the area of science, technology, engineering and mathematics (STEM). Grace Naledi Pandor, South African Minister of Science and Technology, suggested that women should not be considered a minority, but the following question should be posed: why do we not utilize half of the potential talent? The minister said it would be important to gather more data on gender equality.

Julia MacKenzie of the American Association for the Advancement of Science (AAAS) said data collection was in itself futile without a proper analysis regarding which groups of women are not able to find STEM-related jobs, whether they bear managerial positions, and if not, what hinders them. Kuwaiti researcher Layla al-Musawi described how traditional educational principles in the Middle East – women must be modest and stay between their boundaries – prevent female researchers and engineers from promotion.

Éva Kondorosi, full member of the Academy and Vice President of the ERC (European Research Council), referred to research results and said that the lack of female leaders originates less for cultural reasons and has more gender related roots. As she said, the ERC faced the fact that more men, who thought of themselves as ‘excellent leaders’ and using superlatives about themselves, submit applications for research grants than women, who tend to be more reserved when describing their achievements. Éva Kondorosi also mentioned that female researchers are also set back by unstated prejudices: if they publish too many excellent studies, they will be said to have done so in co-operation with their bosses.

According to the ERC vice president, however, prejudices need to be eliminated and with more support from workplaces there will be more women in managerial positions in STEM fields as well. The development of communication skills and emotional intelligence can also promote the process. Layla al-Musawi concluded the session by expressing hope that the day will come when the position of women in science will no further be a question.